Windows 365 is Microsoft’s latest cloud PC. It is called a “cloud PC” since it exists in the cloud and is accessed over the Internet.

Windows 365 is Microsoft’s latest cloud PC. It is called a “cloud PC” since it exists in the cloud and is accessed over the internet. Instead of the traditional model where you had to purchase a computer from a store, you get to rent one from Microsoft, which remains in their data center. In essence, you connect a PC to the internet to access it.

The Windows 365 cloud PC functions like other Windows 10 or 11 pc. You can install software and store files like you would on a regular computer. Windows 365 is beneficial because it offers businesses advanced security, improved collaboration, and increased productivity. 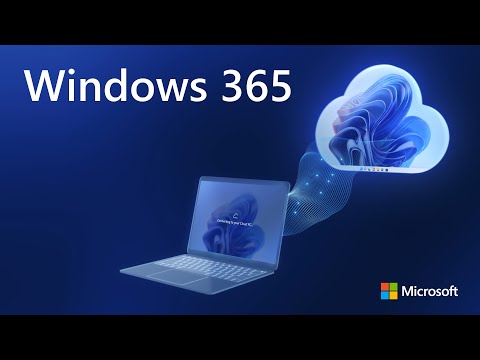 Unlike older versions of Windows, where you had to have the operating system installed on your computer, Windows 365 can be accessed remotely by renting a cloud-based computer and utilizing your current computer to connect to it. This feature is convenient when you have an old device, as you do not have to buy a new one that is compatible with the system.

Instead, your physical device serves as a keyboard, mouse, and display, with the real computing experience streaming live from the cloud. You can also use other devices to connect to your cloud PC, at your friend’s house or away from your office.

Windows 365 is compatible with multiple devices, from Mac to tablets and phones. The physical device you have on hand doesn’t matter, as this is only a conduit for remote access to your cloud-based PC.

Windows 365 is not the first cloud PC service from Microsoft. It is based on the current Microsoft Azure Virtual Desktop service (previously called Windows Virtual Desktop).

Enterprises term Windows 365 and other such concepts as virtual desktop infrastructure or VDI. However, the primary distinction between Windows 365 and conventional VDI is that it is a fully managed service. It does not need a complex server architecture to operate.

How does Windows 365 Perform?

Windows 365 offers a far more intuitive interface. It is more accessible to those unfamiliar with VDI, and the cost is the same regardless of how it is utilized. It’s for those who don’t care about the underlying management and want to get up and running with little hassle.

Windows 365 is available in two versions – Business and Enterprise. The Business version is streamlined and restricted to 300 users, while the Enterprise version has no user restrictions and is designed to work with Microsoft Endpoint Manager. The two versions are available at the same rate. Your choice between the two will depend on the size of your organization and the desired degree of managerial control.

Your cloud PC is a virtual entity that connects to host hardware and utilizes a portion of it. This hardware is interchangeable and shared with other cloud PCs.

Hyper-threading is a technique for accelerating multitasking. Hyper-threads pretend to be an additional set of CPU cores, so Windows will assign it work when, in actuality, they are not actual cores and cannot do further processing.

Hyperthreading speeds up operations more effectively, queuing up work for the actual cores, but not nearly as much as an additional CPU core. Your cloud PC’s vCPUs may portray hyper threads as actual cores, or they may be overprovisioned.

When you have more virtual CPUs than actual CPUs, you are overprovisioning. Typically, processors are not operating at full capacity and do not use all of their cores. Therefore, matching them one-to-one wastes resources.

You may instead share physical cores across a greater number of virtual cores belonging to distinct cloud PCs. As long as many of them don’t attempt to run a significant workload simultaneously, you probably wouldn’t notice a difference.

However, if other customers use their cloud PCs more intensively and the system is overprovisioned, you may see a decrease in performance. Windows 365 utilizes the same infrastructure as Azure Virtual Desktops.

Your Cloud PC is insulated from the device you’re using to access it for security purposes. As an administrator, you have complete control over the data stored on the Cloud PC and may prohibit users from transferring data to their local PC.

Beyond that, Windows 365 follows the Zero Trust security model. For instance, you may explicitly validate each login or access attempt to a Cloud PC using multifactor authentication. This may be used with conditional access controls to analyze login risk for each session rapidly. The user and administrator experiences are built with the least privileged access. Using specialized roles, you may delegate specific responsibilities such as licensing, device management, and Cloud PC administration.

Thus, you do not need to be a global administrator. You may use Microsoft Defender and Edge baselines just like you would for physical devices. A Windows 365-specific security baseline is also included in the system to facilitate a quick start. Microsoft Defender for Endpoint is also compatible with Cloud PCs. Also, as expected, encryption is applied universally to all stored and in-transit data, making it much simpler to provide Windows experiences to almost any device in a secure environment.

As long as you have a dependable internet connection, cloud PCs are adaptable. You also have greater control over the environment, setup, and pricing. Comparatively speaking, Windows 365 is less expensive per device. It is also a fixed-price machine, while your virtual desktop’s cost changes depending on use.

In contrast to other PCs, Windows 365’s pricing is simple, with a flat fee per user. Windows 365 is permanently assigned to you, regardless of whether you need it. If you have a short-term contractor for a couple of months, you can spin up a cloud PC for them and delete it once they are done. This is the finest use case for a cloud PC since it is efficient, secure, and cost-effective.

Get experts to help you out